And it’s not only thanks to its lower price but also because they are the ones to perform the full restoration to factory specifications, therefore turning a previously abandoned model into a collector’s dream. And the 1971 Barracuda that we have here is totally a collector’s dream without even shining bright like a diamond.

It all comes down to what’s under the hood. The engine powering this Barracuda is extremely rare, as the 383-horsepower unit was only installed on five cars produced for the model year 1971. 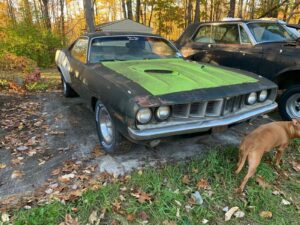 Equipped with a four-speed manual transmission, the Barracuda continues to be entirely original, and the matching-numbers unit is still there under the hood. And best of all, the powerplant still runs and drives, with eBay seller tonystoys1 explaining the original build sheet and fender tag are still around.

Officially, the Barracuda was offered in 1970 and 1971 with two six-cylinder units and a lineup of three different V8s, namely the standard 318 (5.2-liter) as well as the 383 (6.2-liter) in either two-barrel or four-barrel configurations. The Cuda, on the other hand, could be fitted with the 383 rated as 335 horsepower as standard, with the options this time including the Super Commando 440 (7.2-liter) four-barrel, the Super Command Six Pack 440, and the 426 (6.9-liter) HEMI.

As you can easily tell by just checking out the photos in the gallery, this Barracuda needs a full restoration, but given it’s such a rare example, there’s no doubt the car would end up costing a small fortune when done.

Unsurprisingly, it has quickly become an online sensation, with more than 50 bids received in a few hours since the auction went live. The top offer at the time of writing is $25,000, but the reserve is yet to be met.