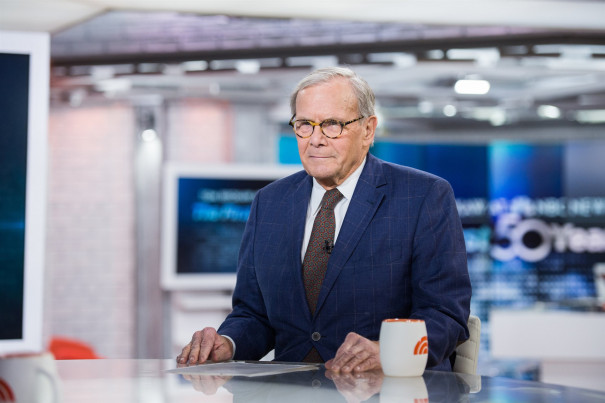 He's the solitary anchor to have helmed each of the three of NBC News' leader programs: "TODAY," "Evening News" and "Meet the Press."

Amazing NBC News anchor Tom Brokaw declared his retirement on Friday, shutting the drape on his 50 years in length vocation chronicling the absolute most wild occasions in U.S. history.

Brokaw, 80, will hang up his mic as the lone anchor to have ever driven every one of the three of NBC's essential news shows: "Evening News," "TODAY" and "Meet the Press."

"During perhaps the most unpredictable and significant times in American history, another age of NBC News columnists, makers and specialists is furnishing America with convenient, keen and fundamentally significant data, all day, every day," Brokaw said in an explanation. "I was unable to be more pleased with them."

While Brokaw has won various, lofty news coverage grants, including Peabodys, Duponts, Emmys and The Edward R. Murrow Award for Lifetime Achievement in Broadcasting, he could be most popular for his work archiving the penances made by Americans during World War II.

His 1998 book "The Greatest Generation" profiled large numbers of those Americans who grew up during that troublesome stretch of U.S. history.

Brokaw started his NBC vocation in the Los Angeles agency, where the organization presently runs its West Coast broadcast center point from the Brokaw News Center.

He moved to the country's capital in 1973 and functioned as a NBC News White House journalist during the Watergate outrage, which constrained Nixon out of office in 1974.

At that point in 1976, Brokaw co-facilitated the "TODAY" show prior to turning out to be anchor and overseeing editorial manager of "NBC Nightly News with Tom Brokaw" in 1983.

He drove the group there for a very long time prior to venturing down in late 2004 to turn into an uncommon reporter for NBC. He likewise filled in as mediator of "Meet the Press" following the inopportune demise of Tim Russert in 2008.